Average days on the market, (the period of time from when a property goes on the market and the date it goes under contract), and the average months of available inventory are both on the rise. They are still less than a third of the way toward indicating a shift from a sellers’ market to a buyers’ market.

The underpinnings of the Real Estate Market—homeowner equity, local employment numbers, population growth, and business expansion are all on solid ground and expanding.

All this is good news for home buyers. With reduction in real estate price inflation, higher interest rates are the home buyer’s only remaining headwind.

Frank Hawkins, President of Hawkins-Poe, Inc., summarized market conditions by saying, “I firmly believe that this will only be a short period of correction. Homeowners in the Puget Sound area shouldn’t be too concerned, especially given that 64% of them are sitting on over 50% of home equity. The local economy remains strong, AND motivated sellers are seeking corrected pricing in order capture buyers who are currently in the marketplace as increasing mortgage rates are reducing buyers purchasing power.” 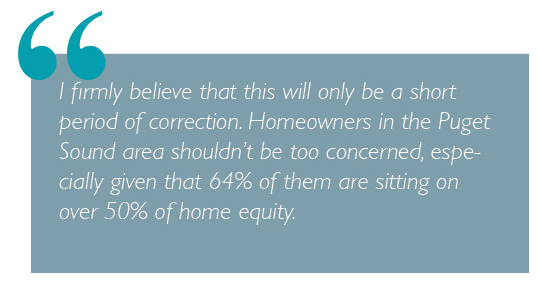